The R3-billion Dr Pixley Isaka Seme Memorial Hospital in KwaMashu north of Durban, originally scheduled for completion by November, has been fast-tracked to open this month (June 2020) to manage the Covid-19 pandemic response in KwaZulu-Natal. 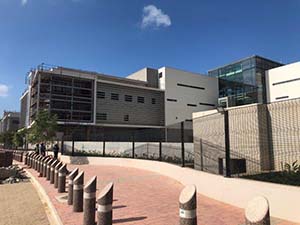 Located near the new Bridge City Mall mixed-use precinct, the hospital is expected to alleviate the pressure on the overburdened Mahatma Gandhi Memorial and Addington Hospitals. It will provide world-class healthcare services to 1,5-million people in the KwaMashu, Inanda, Ntuzuma and surrounding communities in northern Durban.

President Cyril Ramaphosa paid a visit to the hospital in early May as part of an official government assessment of the province’s Covid-19 preparedness. “I have been hugely impressed with how they are managing the process of dealing with the crisis that we have on hand from a health point of view,” the President was quoted as saying.

The largest hospital currently in development in South Africa, it will also be one of the largest public healthcare facilities upon its completion, according to Clinton Crowie, Executive Director of main contractor Enza Construction. The 500-bed regional hospital was named in honour of Dr. Pixley Ka Isaka Seme, one of the country’s first black lawyers and a founding member of the African National Congress (ANC).

Engineering, design and advisory company Aurecon has been involved with the flagship project as structural engineer since it broke ground in 2015. The Aurecon Cape Town building team developed Revit models as part of a BIM approach to the project to improve delivery by means of enhanced efficiencies and increased cost-savings.

This was at a time when BIM was still fairly new to the construction industry, showcasing Aurecon’s innovative approach to delivering complete solutions for its clients. “Such 3D modelling is definitely the way to go, especially in terms of facilitating clash detection,” Stagman points out.

Among the sustainability features incorporated in the design by TV3 Architects of Cape Town are a special rain harvesting system for ablution and irrigation requirements. Aurecon has collaborated closely with the architect since the inception of the project.

This included ensuring that the final design complied with the latest requirements and regulations from the Department of Health. “There were a lot of design iterations, which posed a particular challenge for the professional team in terms of coordination,” highlights Stagman.

Based in Umhlanga Ridge, the Durban office of Aurecon has carved out a niche for itself in the healthcare sector in the province. It is currently involved with the revitalisation programme at the King Edward VII Hospital in Umbilo and with storm-damage repairs at the Wentworth Hospital in the Bluff.

While a lot of consulting engineering companies have focused on sourcing international work, Stagman adds that Aurecon has always retained its local footprint. This is has given it a leading edge in the local market, particularly with regard to public-sector infrastructure.