In the fight to protect Africa’s endangered wildlife, powerful tech such as cloud computing, drones, and machine learning can play a critical role in enhancing conservation efforts, and in combatting poaching and the resultant illicit trade.

In one on-going collaboration between SAP’s Co-Innovation Lab and the nonprofit Elephants, Rhinos & People, or ERP (see erp.ngo), strides made to combat poaching of elephants and rhinos could become a blueprint for conservation efforts across the continent.

According to Rudi de Louw, Head of the Co-Innovation Lab at SAP Africa, advances in technology and new ways of collaborating are paving the way for the development of innovative solutions to protect Africa’s wildlife. ‘Having powerful technology means nothing if you can’t achieve accuracy and consistency in the data and outcomes it produces. We undertook an extensive and on-going co-innovation project with ERP focusing on technical feasibility, product development and refinement. The outcomes are exciting and potentially game-changing – especially, in this case, for an elephant and rhino population that remains under threat.’

There are an estimated 30,000 rhinos remaining in the wild today, a significant decrease – largely due to poaching and habitat destruction – from the half million that roamed Africa and Asia at the start of the 20th century. Rhino poaching reached crisis levels in the last decade, with instances in South Africa increasing more than 9,000% from 13 in 2007 to 1,215 in 2014. Encouragingly, the latest reported figures show a sharp decline in rhino poaching activity, with 594 cases in 2019.

Elephants have also been targeted. After a single poaching incident in 2014 – the first in South Africa in a decade – elephant poaching activity spiked, with 71 reported cases in 2018. The latest official figures show a decrease of more than half for 2019. Across Africa, thousands of elephants have been brutally slaughtered in recent years, with almost entire populations being wiped out in certain African countries.

The nonprofit Elephants, Rhinos & People was founded to preserve and protect Southern Africa’s wild elephants and rhinos through a strategy that is based on alleviating poverty in rural areas surrounding the threatened creatures. It forms part of the structure of groupelephant.com, a largely employee-owned group of companies, non-profits and impact investment organisations with a strong global presence that also includes EPI-USE, the world’s largest independent SAP HCM and Payroll specialist.

Since 2017, ERP.ngo has piloted an anti-poaching strategy that has completely eliminated poaching of megafauna in the areas it monitors. David Allen, ERP Air Force project lead at ERP, and a senior SAP practitioner in EPI-USE, says the deployment of new technologies has been a core element of the initiative’s success. ‘Following a year-long testing and innovation process in partnership with the Co-Innovation Lab, we have made major strides in refining our machine vision, machine learning and response capabilities.’

An unmanned aerial vehicle (UAV) was initially used to monitor the movement of elephants but was quickly deployed to provide a layer of intelligence to how teams responded to alerts. ‘This way a guard could make an informed decision over whether there’s need for an anti-poaching team or, in the case of a fire, a fire team without first having to travel out to the affected area. We gradually expanded this layer of intelligence to other areas,’ says Allen.

Tech at the heart of conservation efforts

Allen says one of the first priorities for the project was to address occasional instabilities in their prototype IT environment. ‘The Co-Innovation Lab team helped us migrate to SAP Cloud Platform, and SAP is providing three years’ cloud hosting to support the production process.’

Siddharth Taparia, SVP and Head of Experience Marketing at SAP, who led the team, says the project marked a world-first for the organization. ‘While we have supported non-profit organizations by providing our on-premises solutions before, this was the first time we supported a partner in the Cloud and illustrates how the brave new world of cloud is transforming businesses of all sizes.’

Following the migration, ERP and the Co-Innovation Lab started working on technical feasibility tests for some of their more ambitious ideas, many of which have over time proven invaluable to the success of conservation efforts. One of these ambitious ideas, according to De Louw, involves extensive development of machine learning algorithms to enable the team to improve its response, data capturing and processing capabilities.

This accuracy is important: as soon as rangers receive too many alerts – especially if they prove to be false – trust in the system starts eroding. ‘We need to reduce false-positives to ensure rangers are only alerted when something requires their attention. This is simpler to accomplish with the on-the-ground cameras, but our UAV-mounted cameras require significant further training and development. A rhino seen from ground level is fairly easy to distinguish from an elephant or person, but as soon as you take an aerial view, animals tend to fade into the landscape. As our data set grows and we refine our machine learning algorithm, these types of inaccuracies will be resolved over time.’ 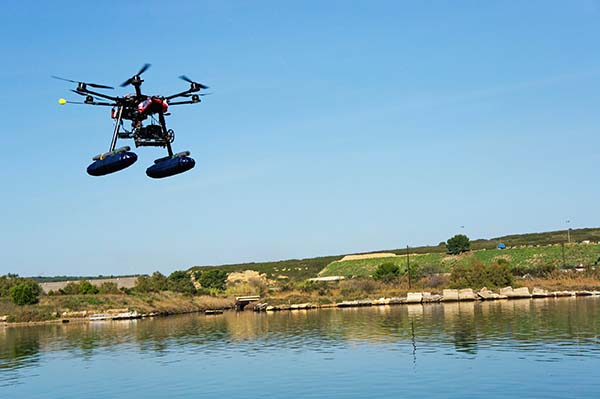 Technology, however, is only one part of solving the problem of poaching. According to Allen, without the support of local communities most conservation efforts are doomed to failure. ‘The poaching trade is immensely profitable. A single rhino horn can fetch more than R5-million on the global black market. For local communities where the average income is as little as R3,000 per month, promises of more money could be life changing. Poachers exploit this, promising a small share of the profit in exchange for protection from authorities.’

Este Smith, Managing Director of ERP says they have introduced several initiatives to involve local communities in conservation efforts, which bring them a direct socio- economic benefit for their efforts. ‘Our Ashoka accredited PEACE (Planning, Education, Agriculture, Cooperatives and Environment) Model is used to provide a holistic, replicable and sustainable poverty alleviation strategy in these remote communities living either adjacent to, or within conservation areas. P.E.A.C.E. Centers are cooperatively-run hubs within local and district municipalities that provide communities with centralised access to education, improved service delivery and agricultural initiatives ranging from permaculture gardens to commercial operations. By enabling residents to unlock and utilise local resources in a sustainable manner, we help pave a way for them to move out of poverty and toward prosperity.’

Through their #BIKES4ERP initiative, ERP has donated more than two hundred bicycles, to aid community member movement and help children who live far from the nearest school get to class more easily. A ’study-to-own’ contract was set with each child to empower them to attain an education – if they attend school for a number of years, ownership of the bicycle will transfer to them. #BIKES4ERP has had a positive effect on the academic achievements of the recipients, ensuring that they are able to get to school more easily – saving precious time and effort, and based upon records kept to date the pass rate of the schools where the bikes are deployed grew from below 50% to more than 85% in 2019.

Through our We Code program, which is held in partnership with local high schools, we are also providing coding training to local youth,’ says Smith. ‘The course allows young people to learn coding in a way that is exciting and relevant to them, for example through programming drones, which builds important digital skills while also enhancing the relevance of other subjects such as math and science.’

According to Smith, the We Code program also potentially holds direct benefits for ERP. ‘One of the main constraints to scaling our conservation model is the lack of drone pilots. By investing in local youth skills development, we could also create the next generation of drone pilots to support similar conservation efforts across the country – and later, in other parts of Africa.

Smith explains that in the wake of the economic devastation caused by the novel coronavirus-related government shutdown, ERP has funded and mobilized a multi-location logistics effort to feed indigent people in communities adjacent to its land-based projects.  In the month of May, several hundred thousand meals will be distributed to 9 locations near conservation areas that ERP is either leasing, negotiating to lease, or simply safeguarding with drone technology. The feeding program will soon be extended to cover an area Zimbabwe, where ERP is currently exploring conservation land deals.

ERP will eventually deploy its technology model to other conservation areas in South and Southern Africa. ‘We are already working on opportunities to scale our solution to reach other reserves. Through a range of community initiatives, we hope to mobilise local communities to support conservation efforts while also unlocking greater skills development and economic opportunities in the process. With our partners at the Co-Innovation Lab, we will also continue to refine the technology underpinning our efforts to protect some of our continent’s most majestic endangered animals.’